For the spring 2015 turkey hunt, I decided to take a different approach for opening morning.My dad influenced the decision, insisting I try a newer decoy that was on the shelves of a small local hunting/fishing store.

The decoy, the Primos Dirty B Injured Gobbler, looks at a different approach to the turkey hunt.

The Dirty B appeals to the aggressive nature of turkeys. The thought process behind this decoy is that tom or jake birds see an injured bird and promptly display a show of violence; the birds are very territorial at this time of the year and attacking a bird when it is down is a show of dominance. A different approachm yes, but boy does it ever work well.

The opening morning for turkey was also going to be a special event as it was the first turkey hunt for my partner Dayle. After venturing out with me for a few hunts the year before, it was quite easy to convince her to apply for a turkey license and pursue the enjoyment of the hunt. Wanting her to gain the most from her first experience, I decided that I would tag along for the hunt. We took one gun; the plan was for her to be the shooter, for me to be the caller and as well attempt to film the hunt.

We decided the night before that we would head to a ground blind we had constructed earlier in the spring. It was situated on the edge of a large rolling field bordering a hardwood bush. This coincidentally was also the location where I harvested my first turkey years before. However, upon arriving at the blind first thing in the morning, we made a last-minute decision to relocate back to a field closer to where we parked the truck. This decision was based on the activity of the early morning sounds of the thunder chickens; the constant gobbling seemed much closer to this location, so we determined that it would be best to close the gap between ourselves and the turkeys.

Our setup was quick and simple. We organized ourselves on a stone pile in the middle of a field using existing juniper bushes as cover. The gobblers were quiet aggressive and especially talkative on this morning. The birds would soon be coming down from the roost and our location change erased much of our valuable preparation time. Knowing we were pressed for time, I had Dayle set herself up on the island, while I paced out locations for the decoys. As I was doing so, I made a few chirps to grab the attention of the gobblers.

A technique I use in the placement of my decoys is always pacing out the yardage of where I situate them. This allows me to always have a gauge of how close or far turkeys are once they come in. The decoys of course become a visual que of distance. Knowing my own shooting range and setting up my decoys accordingly allows me to have total confidence in my shot, and where my patterning will be.

This tactic is easily described and explained to newer hunters, especially when they are able to recall patterning of shots they made at different yardages while target shooting on previous occassions. Predetermining the shot pattern at different distances eased Dayle's mind before her first turkey hunt, as she was able to visually have a sense of how tight the turkey load pattern was at each distance.

On this morning, I set up two decoys: one being the Primos Dirty B, which I placed at a very close range, and the second was a hen decoy, which I placed at about 40 yards. Once I had the decoys where I wanted them, I made my way back to the island and sat beside Dayle. I had literally just touched the dirt when she whispered that she could see not just one, but two male turkeys.

These events unfolded so quickly that I had not even prepared my xcel camera, which I had planned to use to record from a different vantage point. Being so rushed and not able to make any movement was unfortunate but didn’t stop us from being able to capture the events.

The two turkeys -- a Tom and a Jake -- climbed over a stone fence and dropped right into our field. This event completely surprised me, as up to this time, I was under the impression that turkeys would not make such a bold move crossing a fence. Hearing stories of turkeys getting hung up once they’ve come to a fence, creek or any obstacle that stood between them and the hunter was an all too familiar tale, leaving many hunters very disappointed.

Once they were in our field, I continued to sound a few clucks with my mouth call to acquire the attention of the two birds. This quick call drew their curiosity straight to my wounded tom decoy.

Almost instantly after noticing this decoy, the turkeys came full sprint across the field, a good 50-60 yards straight to investigate this decoy. At this point, I was able to begin recording with my cell phone a blurry video of the events to follow.

I encourage you to view the video found on this site. The video shows the two turkeys approaching the decoy in a cautious yet investigative manner. The events which followed aren’t all captured on film but through the audio recording, it is easy to understand what occurred. On video, it is clearly shown that Dayle is able to make a very exciting first turkey kill. Upon her making the shot, I quickly dropped the camera which continued recording, took the gun from her and was able to take a shot of my own and drop the second bird on the run. Needless to say, it was a very overwhelming series of events.

The idea or chance of having a second bird coming out to our decoy setup never once crossed my mind. Having the events unfold as they did that morning is something that we will forever be grateful for, as even with careful planning and preparation, the likelihood of such an event occurring seems so impossible.

Being able to record the hunt to share our story is also very exciting as it was such an unexpected chain of events. We would never have anticipated that this would be the end result of our first turkey hunt, fifteen minutes into our opening morning. It has been almost a year and this experience is still as fresh in our minds as the moment it occurred.

We now find ourselves preparing for the 2016 hunt and as much as we may seek a similar experience, we know that there is no way we can possibly top our shared harvest of 2015. 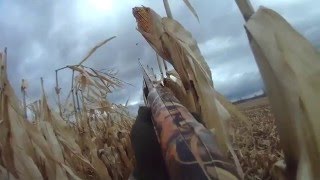